Once the developers are ready with their changes, they can merge their feature branches into the main branch and make those features live on the website. 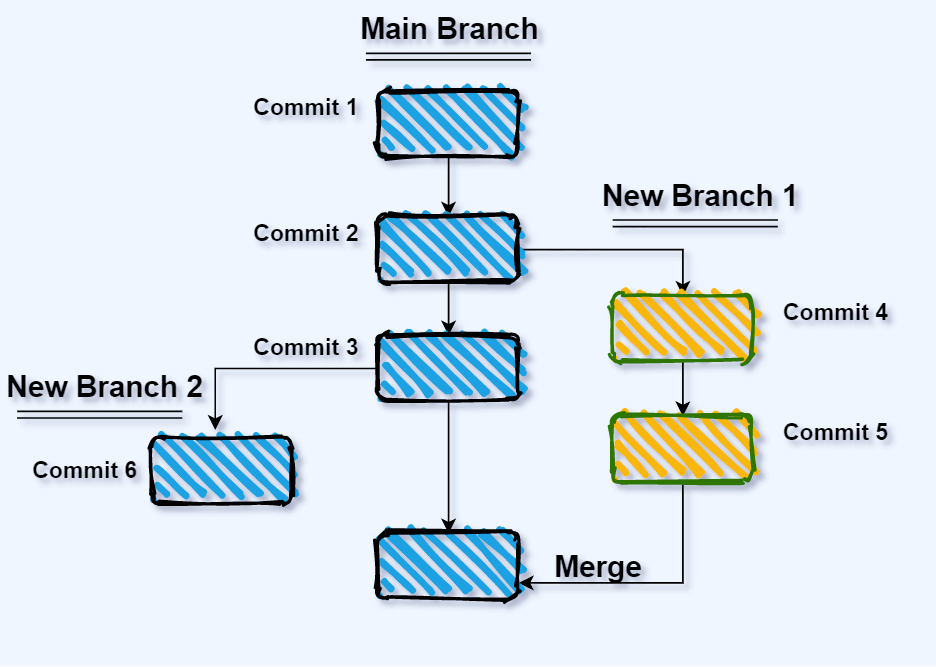 You can do that by following these steps:

As you were on the main branch when you ran the git merge command, Git will take all of the commits from that branch and merge them into the main branch.

Before doing the merge, you could again use the git diff command to check the differences between your current branch and the branch that you want to merge. For example, if you are currently on the main branch, you could use the following:

In this case, the merge went through smoothly as there were no merge conflicts. However, if you are working on a real project with multiple people making changes, there might be some merge conflicts. Essentially this happens when changes are made to the same line of a file, or when one developer edits a file on one branch and another developer deletes the same file.

Let's simulate a conflict. To do so, create a new branch:

Then edit the feature1.html file:

The command above will echo out the <p>Conflict Demo</p> string, and thanks to the double grater sign >>, the string will be added to the bottom of the feature1.html file. You can check the content of the file with the cat command:

You can again run git status and git diff to check what exactly has been modified before committing.

After that, go ahead and commit the change:

Note that we did not run the git add command, but instead, we used the -a flag, which stands for add. You can do that for files that have been added to git and have just been modified. If you've added a new file, then you would have to stage it first with the git add command.

Now go switch back to your main branch:

And now, if you check the feature1.html file, it will only have the <h1>My First Feature Branch</h1> line as the change that we made is still only present on the conflictDemo branch.

Now let's go ahead and make a change to the same file:

Now we are adding again a line to the bottom of the feature1.html file with different content.

Go ahead and stage this and commit the change:

Now your main branch and the conflictDemo branch have changes to the same file, on the same line. So let's run the git merge command and see what happens:

As we can see from the output, the merge is failing as there were changes to the same file on the same line, so Git is unsure which is the correct change.

As always, there are multiple ways to fix conflicts. Here we will go through one.

Now if you were to check the content of the feature1.html file you will see the following output:

Initially, it could be a little bit overwhelming, but let's quickly review it:

You can resolve the conflict by manually removing the lines that are not needed, so at the end, the file will look like this:

In case that you are using an IDE like VS Code, for example, it will allow you to choose which changes to keep with a click of a button.

After resolving the conflict, you will need to make another commit as the conflict is now resolved:

Git branches and merges allow you to work on a project together with other people. One important thing to keep in mind is to make sure that you pull the changes to your local main branch on a regular basis so that it does not get behind from the remote one.

A few more commands which you might find useful once you feel comfortable with what we've covered so far are the git rebase command and the git cherry-pick command, which lets you pick which commits from a specific branch you would like to carry over to your current branch.