So far, we have been working only on our Main branch, which is created by default when creating a new GitHub repository. In this chapter, you will learn more about Git Branches. Why you need them and how to work with them.

The official definition of a Git branch from the git-scm.com website is the following:

A branch in Git is simply a lightweight movable pointer to one of these commits.

This might be a bit confusing in case that you are just getting started. So you could think of branches as a way to work on your project by adding a new feature of bug fixes without affecting the Main branch.

That way, each new feature or bug fix that you are developing could live on a separate branch, and later on, once you are ready and have fully tested the changes, you can merge the new branch to your main branch. You will learn more about merging in the next chapter!

If we look into the following illustration where we have a few branches, you can see that it looks like a tree, hence the term branching: 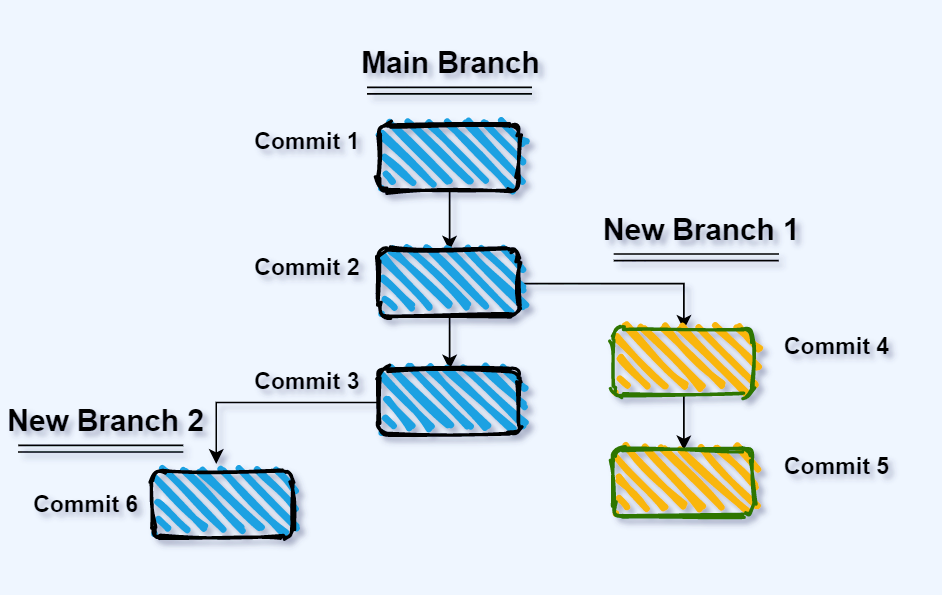 Thanks to the multiple branches, you can have multiple people working on different features or fixes at the same time each one working on their own branch.

Thanks to the separate branches, both developers could be working on the same project without getting into each others way.

Next, let's go ahead and learn how to create new branches and see this in action!

Let's start by creating a new branch called newFeature. In order to create the branch, you could use the following command:

Now, in order to switch to that new branch, you would need to run the following command:

Note: You can use the git checkout command to switch between different branches.

The above two commands could be combined into 1, so that you don't have to create the branch first and then switch to the new branch. You could use this command instead, which would do both:

Once you run this command, you will see the following output:

In order to check what branch you are currently on, you can use the following command:

If you were to use the git checkout command to switch to the main branch:

And then run git branch again. You will see the following output indicating that you are now on the main branch:

Making changes to the new branch

Now let's go ahead and make a change on the new feature branch. First switch to the branch with the git checkout command:

Note: we only need to add the -b argument when creating new branches

Check that you've actually switched to the correct branch:

Now let's create a new file with some demo content. You can do that with the following command:

The above will echo out the <h1>My First Feature Branch</h1> string and store it in a new file called feature1.html.

After that, stage the file and commit the change:

The new feature1.html file will only be present on the newFeature branch. If you were to switch to the main branch and run the ls command or check the git log, you will be able to see that the file is not there.

You can check that by using the git log command:

With that, we've used quite a bit of the commands that we've covered in the previous chapters!

In case that you've created a branch with a wrong name or if you think that the name could be improved as it is not descriptive enough, you can rename a branch by running the following command:

If you want to rename your current branch, you could just run the following:

After that, if you run git branch again you will be able to see the correct branch name.

If you wanted to completely delete a specific branch you could run the following command:

This would only delete the branch from your local repository, in case that you've already pushed the branch to GitHub, you can use the following command to delete the remote branch:

If you wanted to synchronize your local branches with the remote branches you could run the following command:

In the next chapter, you will learn how to merge your changes from one branch to another!

One thing that you might want to keep in mind is that in the past when creating a new GitHub repository the default branch name was called master, however new repositories created on GitHub use main instead of master as the default branch name. This is part of GitHub's effort to remove unnecessary references to slavery and replace them with more inclusive terms.