How to encrypt and decrypt a string in Laravel? 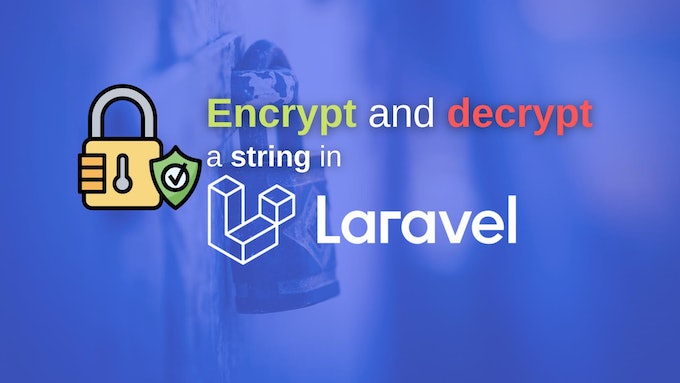 Encryption is the process of encoding information so that it can not be understood or intercepted.

Encryption has been used long ago before computers were invented; actually, the first known evidence dates back to 1900 BC in Egypt.

Another very popular encryption technique is the Caesar cipher. It is one of the simplest techniques, and how it works is each letter of the text is replaced by a specific number of positions down the alphabet.

Laravel, on the other side, provides out-of-the-box encryption, which uses OpenSSL to provide AES-256 encryption so that you don't really have to come up with your own encryption techniques.

In this tutorial, you will learn how to use the Laravel encryption to encrypt text!

Before you get started, you need to make sure that you have an App Key generated.

If you do not have a key already generated, to do that, you can run the following command:

The Laravel encryption will still work without a key, but the encrypted values might be insecure.

To do that, open the routes/web.php file and add the following:

The first route is the /encrypt route, which will generate an encrypted string for us, and the second one will decrypt that string.

With that, let's create the EncryptionController controller!

For this example, let's create a new controller called EncryptionController:

This will create a new controller at: app/Http/Controllers/EncryptionController.php.

Next, open that file in your text editor and first add the Crypt facade:

Then let's create two new public methods: one for encrypting a string and one for decrypting that same string called encrypt and decrypt.

Let's start with a simple Encryption method which would encrypt a hardcoded string for us:

Rundown of the method:

After that visit, the /encrypt URL via your browser and you will see an encrypted string similar to this one:

Note down this string and go back to your text editor to prepare the decrypt method!

Similar to the Encrypt method, we are again using the Crypt faced with the decryptString static method to decrypt the string!

Then this time visits the /decrypt URL in your browser, and you will see the decrypted Hello DevDojo message!

Of course, the above example is just showing Crypt functionality. In a real-life scenario, you would get most likely to get your string from a POST request or an API call for example.

For more information on how to use Laravel Encryption, make sure to check out the official documentation here:

Open-Source Introduction to Bash Scripting Ebook/Guide
How To Display HTML Tags In Blade With Laravel 8
7 Tips on How to Manage Stress as a Developer
How to remove a package from Laravel using composer?
What is Laravel Breeze and how to get started?