The tree data structure looks sort of like this -

Just like a linked list, each of those circles or units that you can see in the above figure is called a "Node".

To be able to understand the Tree data structure perfectly, you'll need to pay a lot of attention towards the terminologies used in it.

Some of the basic terms used in it are - Root Node

In the above figure, the topmost node that you can see is called the "Root Node". The name is pretty much self explanatory, doesn't it look like the origin point of roots of a plant?

The lines that are connecting each pair of nodes in the above diagram is called an "Edge".

The node which is not connected to any other node below its level is called a "Leaf Node".

The nodes that have the same parent node are called "Sibling Nodes".

Degree of a Node

The number of Nodes a Node is connected to is called "Degree" of that Node.

Now that we know the basic terminologies of a Tree, let's talk about the types of trees you will come across in Data Structures. 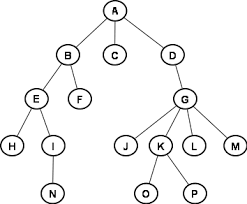 In this type of tree, a node can not have more than 2 child nodes.

It is a self balancing tree. It is also a type of Binary tree. We'll learn about the balance of a tree as we go deeper into this topic.

There are many more trees in Data Structures, but the above are the most common ones.

I hope you liked this article. Check out my other articles here.