17 Special Characters in the Shell That You Should Know 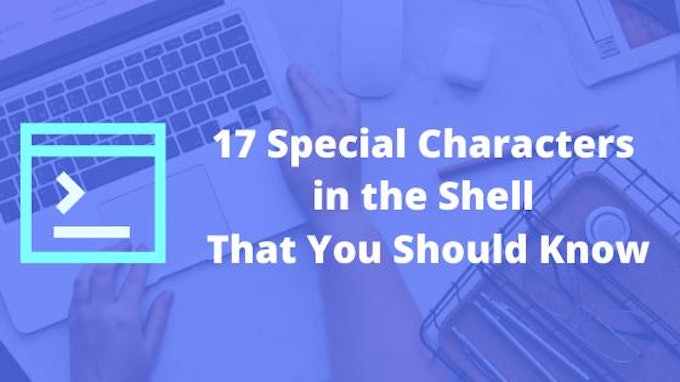 It is used by the operating system to control the execution of the system using shell scripts.

In order to be able to follow along and test the examples by yourself, you would need a Unix terminal. If you are using Linux or Mac you can just use the built in terminals.

If you are on Windows you would need a Linux virtual machine or you could use DigitalOcean and spin up an Ubuntu Droplet for example and test the commands directly on the server:

There are a lot of characters that have special meaning to the shell.

Here are 17 of those special characters in the Shell with examples on how to use them.

You can use the ~ symbol as a shortcut to your home directory:

For example, if you want to edit a file which is stored at your home directory, rather than typing the full path to the file, you could just use the ~ symbol:

Like in a lot of other programming languages you can use the \ symbol to escape characters.

Here's a short script as an example:

Here we first define a variable called my_var and we assigned "hello world" as the value. The first echo would output "hello world" but the second one would just output $my_var as we are using the back slash to escape the $ symbol which essentially means that it is no longer a variable. Give this a go and see the result!

For example if you wanted to go to a directory called logs located in your user's home directory you could use the following:

The $ symbol precedes any variable similar to PHP and some other languages.

The ? symbol is a single-character wildcard, you can use this if you are uncertain of 1 specific character.

Let's say that you have a directory that contains the following files: top, tap, tip, bip, tips. If you run the following command:

Similar to other languages, the single quotation mark ('), escapes any special characters. For example if you run the following command:

The $100 would not be interpreted as a variable but just a normal string.

The backtick (`) allows for evaluating a string as part of general command, for example, if you run the following command:

The date command would actually be executed and you would get the following output:

In this case the output that you would get would be:

The * symbol is a wildcard symbol and is very widely used.

It matches zero or more characters, for example, if you have a directory with a lot of files ending in .txt, in order to get a list of all of those files you could run:

The & symbol is used to start a process in the background, for example:

The above would start the redshift process in the background so that you could continue using your current shell session.

Similar to all other programming languages, && lets you do something based on whether the previous command completed successfully or not.

That's why you tend to see it chained like this:

The above means that if command1 returns true, then do command2.

The || is an “or” comparison operator like with any other programing language.

For example, if command1 returns false, then do command2:

The | symbol denotes a pipe.  A Pipe is a command in Linux that lets you use two or more commands together, by passing the output of one command as the input to the next.

The above would pass the output of the ls -l command to grep which would then search for a file called my-file.txt

By using the ; symbol you can execute multiple commands on one line and you can use the ; symbol instead of a new line.

For example, you could take this for loop here:

As part of a regular expression, brackets define a range of characters to match. For example, let's say that we have a directory and you would like to get a list of all files that contain a number in their name, what you could do is use the following:

The > symbol is used to redirect output of a command to a file, for example:

The above would redirect the output of the echo command to a file called world.txt in the /tmp folder. If the file does not exist it would be created automatically.

The < symbol is used to redirect input to a program. For example, if you have a .sql file, you could import it to your MySQL server with the following command:

Once you know a good number of those you could then start using them together and do lots of cool scripts!