Which Framework is Best for Security, Laravel or CodeIgniter?

Signup for an account to see what it's all about. 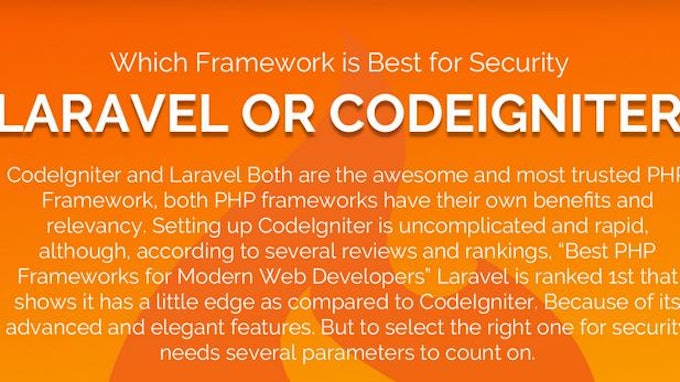 Which Framework is Best for Security, Laravel or CodeIgniter?

CodeIgniter and Laravel Both are the awesome and most trusted PHP Framework, both PHP frameworks have their own benefits and relevancy. Setting up CodeIgniter is uncomplicated and rapid, although, according to several reviews and rankings, “Best PHP Frameworks for Modern Web Developers” Laravel is ranked 1st that shows it has a little edge as compared to CodeIgniter. Because of its advanced and elegant features. But to select the right one for security needs several parameters to count on.

Codeigniter and laravel both possibility has its own benefits and assets, but updates and security features are the main elements a developer would go for. Laravel executed and planned according to any a developer demands. And we can see all over on the internet that most of the websites are today being made-up on Laravel or say Laravel is being adopted most in web application development. There is entirely no doubt that you can easily create a high-quality web app.

Author Bio-  Shruchi is technical writer at F5 Buddy, which is a Laravel development company, She is responsible for content strategy, documentation, blogging, and editing. He works closely with F5 Buddy, development, marketing, and administrative teams to produce all manner of written content. In his free time, Shruchi is an avid guitarist, cook, and traveler.